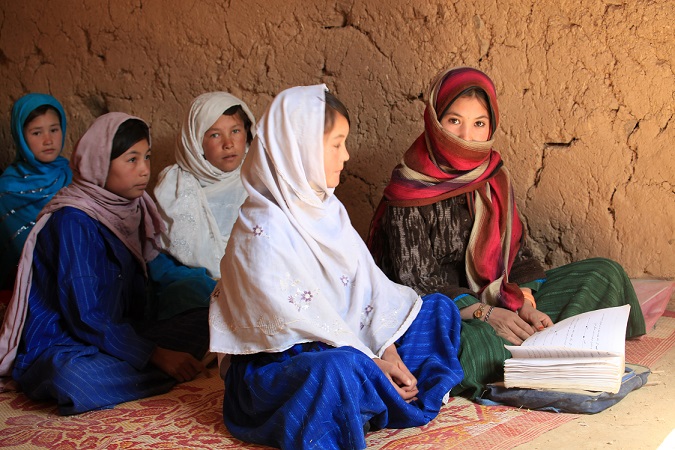 In the 1890’s, Emir Abdur Rahman comes along. He is a king who reserves special scorn for your people, and in order to control territory and to scare troublesome groups into obedience, he makes an example out of yours. Your people are easy to target — the different-believers, the different-lookers.

The moment you leave the country, you are illegal. So you are sitting in a parking lot watching your people die, because even though you haven’t chosen sides in this civil war, you’ve been assigned one.

Many of you escape, but millions of you don’t. So many of your people are killed that you believe fewer than half survived. Even statues that look like you are attacked.

For the next century, those of you who survive are relegated to the bottom rungs of society. The king has made it difficult for your people to gain admission to university and places a ceiling on the rank you can achieve in the military. Later, a group that calls itself The Students, or the Taliban, will take over the country and declare it every Afghan’s duty to kill your people.

Imagine, though, that you are one of the lucky ones, and you escape before the king or The Students can get you. You go to a country next door.

Iran is a country where, mercifully, everyone is the same religion as you — Shia. You think you will be welcomed there. There, you are still an ethnic minority, but you are no longer a religious one.

Then there is a revolution, and then a war, and then the ending of a war. People emerge from the tumult and remember that their economy is not very good. There are sanctions. And your people, the different-lookers, are the target of most of the rage. There are not enough jobs for everyone, so why should your people get to take them?

You must leave again.

Some of you go to Iraq. There, Shias are not in power, but at least there are many of them. Plus, there are important Shia sites in Iraq, so while you feel physically alien, you can make-believe you are spiritually home. Iraq has a powerful and fearsome dictator, but no matter; you are safe.

Until you are no longer safe. The dictator embarks on a foolish war and becomes an enemy of peace, a cancer in the region. Iraq is a pariah state and its dictator a paranoid man who fears that those who aren’t like him will soon betray him. He hates Iran, and knows your people were there. And even though you were driven from Iran, you are spying for them, the dictator thinks.

You must leave again.

In Syria the situation is reversed — there are far more Sunnis than Shias, but the Alawites, a kind of Shia, are in power.

You find homes near a shrine, and you settle again. Finally you are safe and free, even though you are four countries from your own and have no papers so you cannot leave.

Then a popular uprising envelops the region and the president of this new land watches heads of state fall all around him. He resolves to stay. He cracks down on those opposing him; he is merciless and decisive. He is killing militants and people suspected of being militants. Soon he is killing so many civilians it is hard to believe he is not killing civilians on purpose.

It is a terrible thing you are seeing, but that’s not the worst of it. The worst of it is that the president doing all this killing belongs to your religion. The people dying are the Sunnis.

The Sunnis are angry, traumatized, and full of fire. They have seen the bodies of their loved ones broke open, and when they look up from the carnage, they see you, the different-lookers. The people who believe like he believes, the man behind the slaughter.

The victims think: You like this evil man. His family let you live in this country, so surely, you are helping him. You are providing him information. Or maybe you’re not now, but soon you will. And so some of the victims arrive at your doorstep to drive you from your home.

There are about 1,000 of you left. You’ve now been kicked out of your houses, you live in a parking lot next to a shrine, and you are watching mortar rounds fall closer and closer to your family.

And then you’re watching mortar rounds hit your family. You are watching your people die in a fourth country. You want to flee, but you can’t. You don’t have papers, remember? The moment you leave the country, you are illegal.

So you are sitting in a parking lot watching your people die, because even though you haven’t chosen sides in this civil war, you’ve been assigned one.

You are Hazara. Your name actually means “thousand,” and you are reliving your own founding myth. You look Asian because your ancestors in Afghanistan were Buddhist pilgrims, or because you descended from Genghis Khan, or both — this is a contested historical point.

You are Muslim, but you are Shia. What this means is that in Afghanistan, you believed in the right God, but the wrong way. In Iran you believed the right way, but looked wrong. In Iraq, and now in Syria, you were wrong in both ways.

You have never been too comfortable in the places you live because you’ve always looked different. And you have always been under suspicion because you believe differently. Those of you with features mild enough to pass as other ethnicities often try to.

But now you are trapped. You’ve moved west and west and now if you moved any further west you’d be in the Mediterranean Sea. You have survived a massacre in Afghanistan, a revolution in Iran, a tyrant in Iraq, and now, a civil war in Syria. You have always been the first to suffer, but you’ve always been able to go a little further west. Now you can’t.