Today 9th November 2013 dozens of deportees and the families of those affected by deportations gathered in front of Afghan Parliament to demonstrate against deportations to Afghanistan. The demonstration started at sharp 8 and ended 10:15 Am local time

Mr Ramazan Bashardost was the first person to come and talk to those who had gathered for demonstration. He then had an interview with the media. Mr Ramazan Bashardost while talking to the media held Afghan Government responsible for the lives of Afghan refugees around the world and Afghanistan. He said; whenever Mr Hamid Karzai or anyone for the refugee ministry or foreign ministry visit European countries’ or Australia They say lie to those countries and try to convince them’ Afghanistan is safe, Which is totally wrong. Mr Bashardost also urged the Afghan refugees around the world to demonstrate in those  countries they are living in ‘when President Karzai or anyone from Refugee ministry visit those countries 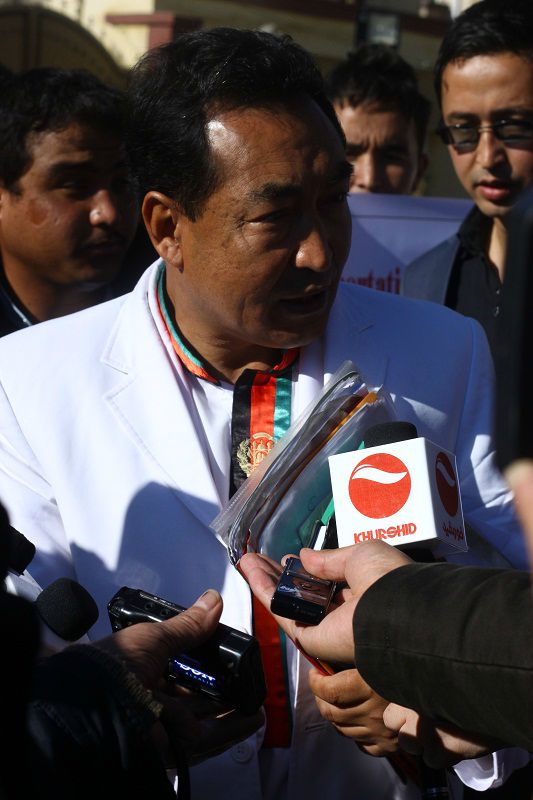 Ms Laila Haidari a social activist and director of Life is beautiful organization was the next speaker in the gathering. She also delivered her speech condemning inattention of Afghan government toward the Afghan Refugees around the world and Afghanistan. She addressed to the condition of Afghan refugees around the world and the misbehavior of host countries considering the international conventions. 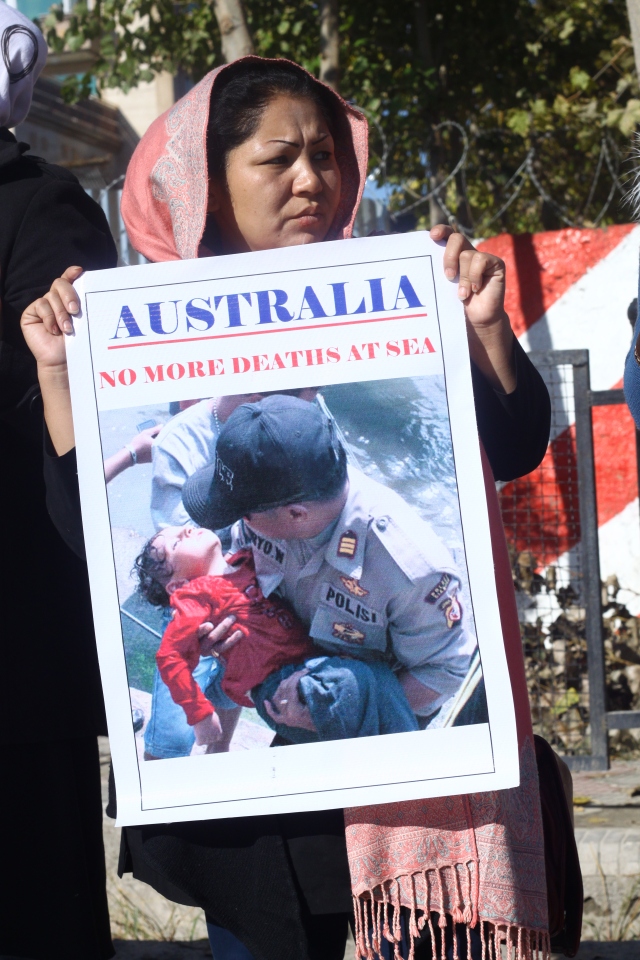 Engineer Raza Agah was the next speaker. He is brother of 23 year old guy who lost his life in the Indonesian sea trying to reach Australia. Raza’s brother and two of his cousins were together when their boat sank in the Indonesian shores trying to reach Australia and seek for protections, but they never knew what was waiting for them. He emphasized and highlighted the condition of the families of refugees when they leave the country and arrive to their destination.

Engineer Ali Raza said we couldn’t believe our ears when we heard we have lost 3 people of our own family. Raza’s brother and his two cousins  had newly graduated and were working in a construction company in Ghazni. When life got tough for them after they started getting death threats. Many of their colleagues were stopped and killed on the way to Ghazni and kabul’ when Raza’s brother and cousins were working with the company

Ms Zahra Sepehr was the next speaker representing the civil society combined of different NGOs, Journalists, and social activists. Sepehr started her speech considering the harsh condition of Afghan refugees around the world. She also emphasized on Afghan Government to fulfill their responsibilities to protect their citizens in and outside Afghanistan. She also added; host countries have to respect the international convention of Refugees and give the refugees all right to legal assistance.

Miss Zarghona Roshan director of Women and progress addressed the demonstrators with the message of justice for Afghan Refugees around the world. The right to legal rights in Europe and Australia and every part of the world. She also emphasized and criticized the Afghan Government, particularly refugee ministry in corruption. She added; refugee ministry is involved in thousands of dollars corruption, but they don’t even know what is happening with the Afghan Citizens around the world. 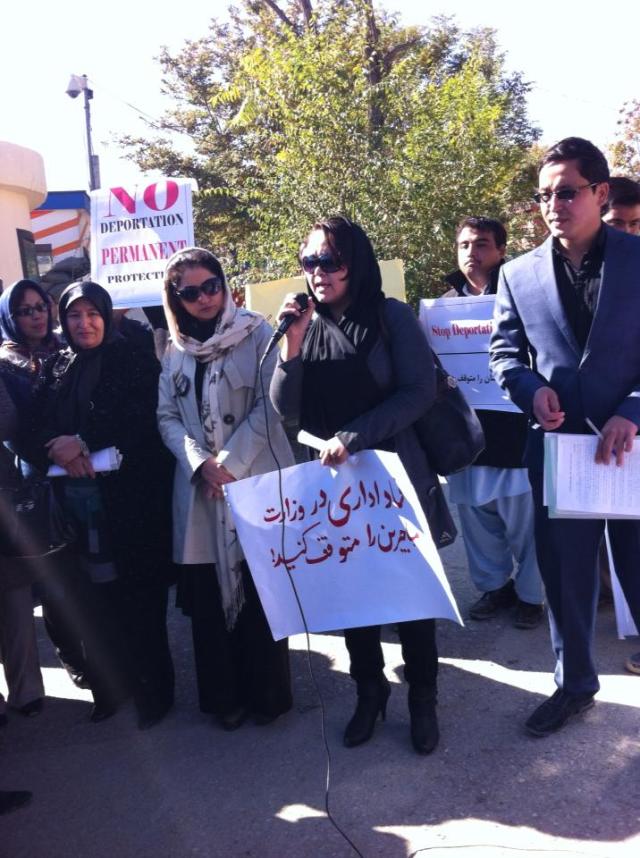 Abdul Ghafoor one of the Organizers of the demonstration then thanked all the refugee right groups, civil society members, journalists, students, families of those who had been affected by losing any member of their family getting to Australia or Europe, and all those who had come to join us in our cause

He then added: It is the responsibility of Afghan government to protect its citizens around the world, but unfortunately Afghan Government has failed to protect its citizens. Today while we have gathered here to raise a voice for refugees around the world and talk about the problems of those who have been forcibly deported back to Afghanistan. more than 450 Afghan refugees are living in their worst phase of life in Belgium. They are constantly being tortured and mistreated by the Belgium Government. They have even used teargas on peaceful Afghan children and woman while they have stood for their rights.

Despite all these bad days and conditions Afghan Refugee ministry or foreign ministry don’t even know. or don’t want care about their citizens around the world.

That is why we demand to Stop all Deportations to Afghanistan. and we want from the true representatives of Afghan people to raise our voice in the parliament and pressurize the ministry of Refugees and repatriation to avoid signing any kind of MOU with European and Australian government which will put lives of thousand of Afghans in danger

Miss Zarghona Roshan was again requested to come and recite the statement and demands of the protesters.

After Zarghona Roshan recited they statement and demand letter. Four female MPs from within the parliament came out to give the support to us for gathering and raising the voice of Afghan refugees around the world and deportees. 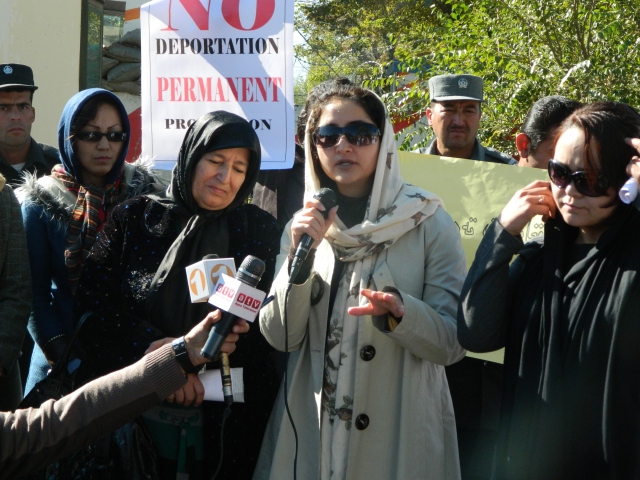 ‘Farkhanda Zahra Naderi’ and the other female MPs were concerned about the Australian policies for refugees which put thousand of lives at risk of deportation. and the ongoing deportation from European countries to Afghanistan. They also emphasized every human has a right to migrate and there rights must respected according to the international conventions and laws

At the end statement letters were distributed to the media and security branches and the demo ended peacefully.