(Kabul) – Afghanistan’s human rights situation regressed in key areas in 2013, increasing uncertainty about the country’s future, Human Rights Watch said today in its World Report 2014.Government policies on human rights were negatively affected by the end-2014 deadline for the withdrawal of international combat forces and the negotiations over US troop presence after 2014. Human rights concerns increasingly took center stage ahead of the planned April 2014 presidential election.

The Afghan government under President Hamid Karzai made a series of decisions in 2013 that undermined human rights, particularly those of women and girls, Human Rights Watch said. Taliban insurgents continued their campaign of targeted assassinations of government officials, including women. Security is of key concern in the run-up to the presidential election, having a particularly harmful effect on the participation of women who already have a severely limited role in Afghan political life.

“Afghan women are all too aware that international donors are walking away from Afghanistan,” saidBrad Adams, Asia director at Human Rights Watch. “Unfortunately, those who want to curtail women’s rights realize this too.”

In the 667-page World Report 2014, its 24th edition, Human Rights Watch reviews human rights practices in more than 90 countries. Syria’s widespread killings of civilians elicited horror but few steps by world leaders to stop it, Human Rights Watch said. A reinvigorated doctrine of “responsibility to protect” seems to have prevented some mass atrocities in Africa.  Majorities in power in Egypt and other countries have suppressed dissent and minority rights. And Edward Snowden’s revelations about US surveillance programs reverberated around the globe.

Afghan women are all too aware that international donors are walking away from Afghanistan. Unfortunately, those who want to curtail women’s rights realize this too. Brad Adams, Asia director HRW

Opponents of women’s rights took advantage of waning international interest in Afghanistan to begin rolling back the progress made since the end of Taliban rule in 2001, Human Rights Watch said. A May parliamentary debate on the groundbreaking Law on the Elimination of Violence Against Women (EVAW Law), passed by presidential decree in 2009, was halted after 15 minutes to block numerous lawmakers who were calling for the law’s repeal and speaking out against legal protections for women and girls. The law remains in place, but enforcement is weak. 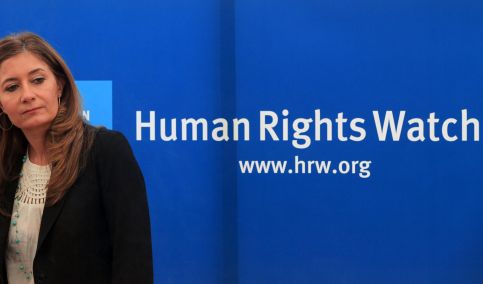 A string of physical assaults in 2013 against high-profile women, including murders, highlighted the danger to activists and women in public life.

Human Rights Watch research documents declining security and respect for human rights in the country. Government security forces and other armed groups continue to commit abuses with impunity. Deteriorating local security and growing fears for the future contributed to increasing numbers of Afghans fleeing their homes for other parts of the country, other countries, or choosing not to return from overseas. The United Nations High Commissioner for Refugees documented an increase of more than 106,000 internally displaced people from January through June 2013, bringing the total to over 583,000. The main causes of displacement were armed conflict and diminished security.

“The severity of Afghanistan’s human rights crisis in 2013 demands urgent action by both the government and the country’s foreign donors,” Adams said. “The failure to make human rights a priority during the year of a presidential election, and the backlash resulting from diminished international attention and support, threaten much of the progress that has been achieved.”