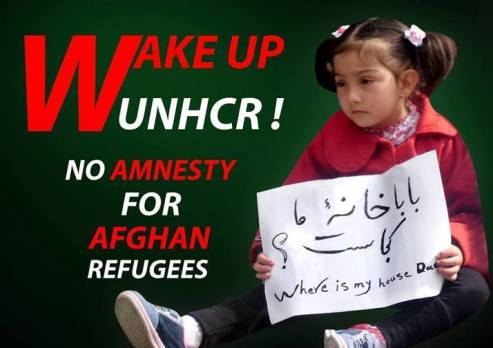 ISTANBUL – Refugees and Afghan asylum seekers is faced to big discrimination question into Turkish limbo and arms of smugglers.

Turkey and UNHCR does not give refugee status to anybody from Afghanistan or outside Europe, in last few days a lot of people from around Turkey protest against discrimination and deafen policy, Asylum seekers said.

The situation arose as far back as 1951, when it opted for a “geographical limitation” in its adoption of a UN refugee convention, which reserves the status only for “persons who have become refugees as a result of events occurring in Europe.”

Even if the UN refugee agency, the UNHCR, takes somebody under their wing, when they get to Turkey they have to pay for their own temporary residence.

Prices hover at around 400 Turkish liras (€171), to be paid every six months – a fortune if you come from an Asian warzone.

They are housed in one of 52 “satellite” cities, located primarily in rural zones, where they sometimes languish for years with few prospects of ever getting Turkish citizenship EU observer investigation team highlighted.

It’s around three weeks, afghan hunger strike and protested for achieving to the basic rights, as refugees who were attacked by Turkish riot police last night on26th April 2014.

Afghan refugees had peaceful sit-in front of Ankara UNHCR office for their basic demands where Turkish riot police attacked, report says women and children are among the protesters and several defenseless and oppressed Afghan refugees were strongly injured.

Afghan refugees asking for taking action by UNHCR to respond them clearly for their suspension cases as soon with no crooked nose and disregard.

Turkey and United Nations (States) violated Geneva Convention “1951” by this embarrassing attack by riot police, the UNHCR office must take action to answer the refugees logically, their situation and explain them new approvals …

This attack and Afghan predicament is obvious negligence by UNHCR and UN should take serous what is happening in Turkey.

According to investigation, if you want to leave your town, even for a short visit to somewhere else, you need police permission. If you do not have it and you get caught, you are an “escapee” and you might go to prison.

Those lucky enough to get out of Turkey go mainly to the US, Canada or Australia – the three countries took in almost 7,000 UNHCR-recognized refugees out of 17,000 UNHCR applicants in Turkey last year.

Very few end up in the EU legally, as member states do not want resettled refugees from Turkey.

“The majority [of legally resettled people] are Iraqis and Iranians, who are much easier to resettle because the policy of main resettlement countries prioritizes these nationalities and not the Afghans,” said Ana Fontal of the Brussels-based European Council of Refugees and Exiles.

At the same time, the number of Afghan people fleeing conflict and poverty in Turkey is mushrooming.

“Many of the Afghans are actually from Iran who are also there in an illegal situation. A lot of the Afghan people from Iran are mainly coming for economic reasons,” a source working on migrant issues in Istanbul, who asked to remain anonymous due to the sensitivity of their work, told this website.

The UNHCR noted that Iran kicked out over 190,000 unregistered Afghan nationals between January and September.

It cited EU economic sanctions as one reason. It also dubbed them a threat to national security.

The Helsinki Citizens Assembly Turkey, an NGO based in Istanbul, estimates that the number of asylum applications in Turkey will soar due to the new Afghan diaspora.

Faced with no prospect of normalisation of their status in Turkey or of being resettled in Europe or further afield, many Afghans end up in Istanbul’s Zeytinburnu neighborhood, where long-established people smuggling groups tempt them with the promise of a better life elsewhere.

Those who take up the offer used to try to get into Greece by crossing the Evros river on the Greek-Turkish border.

The river used to see up to 300 illegal crossings a day.

Some people used to sneak over the river-free land border and queue at the police station in the Greek town of Orestiada, because authorities at the time were handing out 30-day residency passes and then letting them roam about in the country.

But new initiatives – a surge in the number of guards, a wall, a tough detention policy for people who get caught – has seen detected crossings at the land border fall by more than 90 percent.

An Afghan national – speaking on condition of anonymity – who works with migrant smugglers in Zeytinburnu told this website more and more people now target Bulgaria or go further south through the Greek islands to reach mainland Europe.

If they get people into Bulgaria, the smugglers channel them to Montenegro, Bosnia (the border towns of Foca, Cajnice and Gacko) and then into Croatia.

“The flow coming in from Turkey and Greece and then up is just growing,” says Gianluca Rocco, who heads the Bosnia office of the International Organisation for Migration (IOM).

For their part, Bulgarian authorities say the number of migrants detected entering the country from Turkey doubled in October and November of 2012, prompting it to increase patrols.

Most were either Afghan or Syrian refugees.

Bosnian authorities have also registered a “remarkable increase” in the number of irregular migrants coming via Montenegro.

Another route is Bulgaria-Macedonia-Serbia, where the terrain is flatter and easier to cross.

Once in Serbia, people take taxis or buses and cross directly into the EU.

“In the old days, 10 years ago we were used to seeing minivans of people from Eastern Europe. Now you see people catching buses and taking taxis and these are people from Afghanistan,” the IOM’s Rocco said.