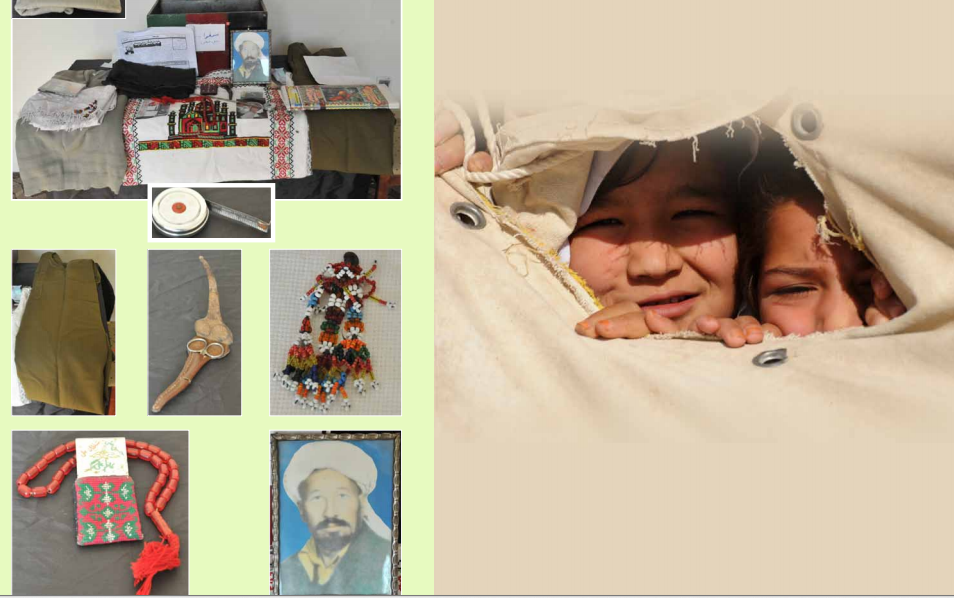 Using the Aesthetics of the Oppressed, AHRDO trainer, Salim Rajabi, worked with the victims to help them revitalize their creativity, retell their stories of loss and memories of their loved ones, imagine their ideal Afghanistan and draw favorite flags for Afghanistan they wish to see.  Inter-workshop participants exhibitions were aimed to connect the victims’ survivors to each other and the public exhibition was held to share their memories and stories with the wider public, media and human rights organizations and activists.

The day of the second inter-workshop participants exhibition was planned to coincide with December 10th, International Human Rights Day and National Victims’ Day in Afghanistan.  Families and relatives of victims, some other people from the victims’ community and a number of journalists visited the exhibition. This time, AHRDO tried to convene the exhibition in an innovative way by combining parts of the Infinite Incompleteness, a documentary theater play that tells the story of Afghan war victims, with the Memory Box exhibition. This play was developed and produced by AHRDO in late 2010. A short documentary from the event was prepared by AHRDO, which is available both on YouTube and AHROD’s social media pages along with English subtitle.  Starting the exhibition with the infinite incompleteness encouraged the victims’ survivors to share their stories and tell their experience of grief and suffering due to loss of their immediate family members.

The Memory Box Public exhibition took place on February 17, 2016 at AHRDO office where 24 memory boxes of the victims who had participated in workshops in 2015 were displayed publicly.

Husain Hasrat, peace and human rights researcher, talked at the opening of the exhibition. Mr. Hasrat emphasized on the importance of memorialization in preventing the recurrence of tragedies. He also maintained that without coming into terms with our painful past, we would not be able to make our way toward a peaceful future. He also noted that in the countries with an agonizing past, there have been great efforts to preserve the memories of conflict, and creation of museums of war in these countries to let succeeding generations not forget the tragedies of past and have access to the legacies of the conflict. But unfortunately, such efforts have been hampered by political unwillingness and a lack of unanimity about how to come into terms with past in the top leadership level in Afghanistan.

More than one hundred people from different organizations, victims’ communities, media entities and human rights activists visited the exhibition, interviewed the victims’ survivors, and talked to the relatives of the victims. They expressed their empathy and wrote impression notes regarding the victims of conflict in general and the exhibition in particular.

Kara Lozier, who visited the exhibition for the first time, wrote: The Memory Box exhibition was a really moving way to humanize the effects of war. It is too easy to be desensitized by the media accounts of war without giving thought to the family members and loved ones who are left behind. It was particularly moving to speak with some of the surviving family members and to feel firsthand how their lives have been affected.

Ali Reza Yasa, a teacher and educator, wrote: I was deeply touched and affected by the exhibition. This way of remembering the lost dear ones are very creative. Beans and toothpaste [used by victims] and the pains associated with them, creates an emotional storm in the visitor. While visiting the exhibition, I was imagining myself who could be a victim and today one of the memory boxes belonged to me.

Daud Naji, another visitor, wrote in his note that “this exhibition reminds of our mistakes as a nation. This is very important. More important is documenting and preserving our memories of such a history because it can help us to prevent from the recurrence of the tragedies.”

View all posts by Admin