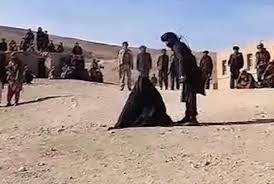 In a Kangaroo Court, the Taliban militants lashed a couple on charges of having affair.
The young lovers had escaped from village of Kohistanat district to Ghor province while their family rejected their marriage and than returned back to their houses by inductions of elders.

They were back to their home region following mediation by elders and as Taliban became aware of the matter, the group punished them with 80 lashes in public, Faryab police spokesman Abdul Karim Yuresh said.

Public lashings and executions were common under the Taliban when they were ruling the country from 1996 to 2001.

Unfortunately, the Taliban-controlled kangaroo courts are increasing day by day, as we have seen countless kind of such cases this year which last month on February 14, Taliban also stoned a young man for adultery in the northern province of Sar-e-Pull.

Most of the victims are often women and girls who are brutally being killed and beaten by the people and Taliban.

Recently the Independent Human Rights commission registered many cases of kangaroo courts in last one year.

– The Taliban are openly active in 70 percent of Afghanistan’s districts, fully controlling 4 percent of the country and demonstrating an open physical presence in another 66 percent, according to a BBC study published on Tuesday 31 January 2018.