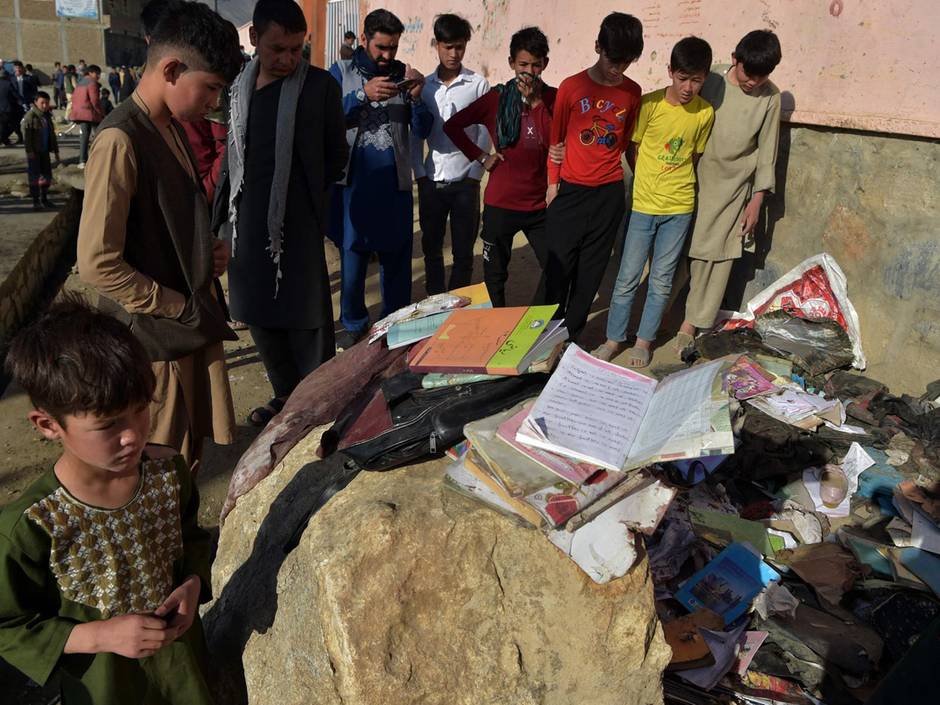 A blast ripped through an area near a high school in the Afghan capital Saturday, government officials said, killing 50 people — many of them schoolchildren — and wounding scores of others.

The number of wounded in the attack has also climbed to more than 100, Interior Ministry spokesman Tariq Arian told the Associated Press.

So far no group has claimed responsibility for the attack, which occurred sometime after 4 p.m. and appeared timed to cause maximum damage: when dozens of mostly teenage schoolgirls were leaving the Kawsar Institute, an educational center near the Sayed Ul-Shuhada High School in west Kabul’s Dasht-e-Barchi neighborhood, with families out shopping before iftar, the evening breaking of the Ramadan fast.

The area is heavily dominated by the Hazara, an ethnic minority that is Shiite Muslim and a frequent target of Islamic State.

Many of the casualties were taken to the Muhammad Ali Jinnah hospital in west Kabul, with people coming forward to donate blood for the wounded. Elsewhere, parents and family members began the grim task of burying their dead.

In the hours after the blast, residents and journalists shared harrowing images of students sprawled on the ground, with schoolbooks and bloodied sneakers scattered around them. One video uploaded to social media depicted the bedlam in the explosion’s aftermath: people moving in a dazed rush, their wails joined by an insistent car horn blaring as they raced to check on loved ones; a blackened husk of a car in flames and blood splattered on the pavement.

It remained unclear if the attack was the work of a solitary suicide bomber with an explosive vest walking up to the institute’s gates, a car bomb or a series of explosions involving rockets as part of a larger onslaught on Dasht-e-Barchi.

Whatever the cause, the blast, which coincides with U.S. and NATO troops’ move to leave the country, served as yet another potential harbinger of increased violence facing minorities — not to mention women and members of civil society — in Afghanistan’s post-withdrawal future.

With talks between the Afghan government and its Taliban adversaries in limbo, many fear a Taliban reenergized by the U.S. withdrawal will swat away government troops soon after their foreign partners leave. Hopes for a cease-fire before the end of Ramadan have been dashed by the group’s spring offensive, which has seen furious assaults on government positions across the country.

The Taliban, however, denied involvement in the explosion.

He blamed the attack on “sinister circles operating in the name of Daesh under the wings & intelligence cover of #Kabul admin,” referring to Islamic State by its Arabic acronym.

The Sunni extremist group counts Shiites as apostates who must be killed. It claimed responsibility for similar explosions in the area in October as well as August 2018, with students the main victims of both attacks.

With troop numbers plunging below 2,500 U.S. servicemen and foreign forces accelerating their withdrawal ahead of a September deadline, Washington’s deal with the Taliban has shifted focus from attacking the group to a more targeted campaign against Al Qaeda and Islamic State’s Afghan affiliate. It remains unclear what support the U.S. will maintain for Afghan paramilitary groups it had trained to hunt the extremists in blitz operations across the country.

The United Nations’ mission in Afghanistan expressed “its deep revulsion” at the blast in a tweet Saturday evening, describing it as “an atrocity” that had killed and injured many civilians.

U.S. Charge d’Affaires Ross Wilson tweeted: “This terrorist attack on a Kabul girls’ school is abhorrent. With scores murdered, this unforgivable attack on children is an assault on Afghanistan’s future, which cannot stand. My deepest condolences to the students & families who have suffered.”